The Appendix.
Such a little thing, and yet it can cause oh so much trouble.
Vera threw up from about 2am till 5am Monday October 7th, and the next day she had a fever and diarrhea (sorry... it is just a factual part of this story).  The crazy thing was that at least three other family members had been having a touch of bowel issues, so I assumed she had a stomach virus that had just hit her harder.  But, the next day she didn't improve.  Nor the next.  Nor the next.  Her low-grade fever just stuck around, her stomach hurt, and she had to run to the potty often.  Finally on Friday I took her to the doctor.  The nurse practitioner thought it was likely a stomach bug as well, but mentioned that it could be the appendix.  She tested Vera's urine and saw she was severely dehydrated and tried to get a blood sample but couldn't.  The nurse who was an expert at hitting veins was busy, so the NP sent us home with instructions to go get help if she grew worse. (Hindsight is 20/20... we should have demanded that blood test or go to the ER at this point.)
On Sunday Vera seemed all better!  Her stomach didn't hurt very much anymore and her fever broke.  YAY! She was finally better.  Again... that hindsight thing... a nurse later told me that this is likely when her appendix ruptured.  When the pressure that has been building finally releases, there can be a sense of relief and feeling better when in fact, all that bacteria just spread into the abdomen.
On Monday afternoon Vera's fever came back and she felt really badly.  I went to bed that night scared.  I was listening for any cries of distress that should pull me from bed to rush out the door to the ER. 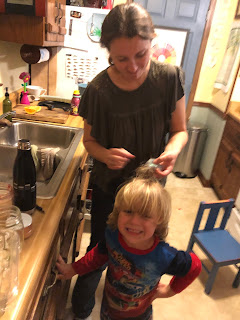 Also that night, Justin had gone out of town on a business trip and Patrick got a container of slime stuck in his hair.  Oftentimes there is more than just one crazy thing happening at a time in a family with 5 kids.
Vera woke up Tuesday, October 15th, moaning and with fever.  I felt her tummy and she jumped when I touched the right side.  I called my mom to come to stay with my boys so I could take Vera to the Children's Hosptial.  What a blessing to have my mom close by to help me.  It was seeming more and more likely that it really was her appendix. 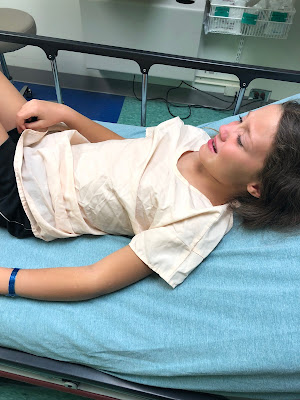 Vera is one tough gal... one reason it took us so many days to get to the ER is that she just didn't look severely ill much of the time.  She would often chat and laugh with just a bit of moaning.  This picture was taken when she asked about Daddy being out of town and I told her that he loved her... she let her guard down to shed a tear or two.
She couldn't eat or drink till diagnosed, so the poor gal was without food for 15 hours, which was one of the worse parts for her.  After an ultrasound of her appendix, I walked back to our room in the ER to find a whole team of surgeons waiting for us.  I guess.... it really is her appendix then?  I asked.  Woops, the doctor had meant to tell me before they got there. 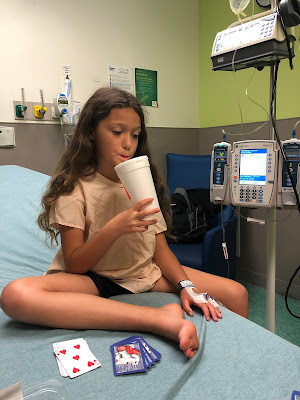 The next step was a CT scan to get a more accurate picture of what was happening.  She had to take "Contrast" so they could see her insides better, so she at least got to drink a bunch of red Powerade to consume the Contrast (in addition to getting it in an IV).  They made us watch a video of risks and benefits of Contrast, which, right after you've discovered your daughter has a perforated appendix, is NOT an ok next step when they slowly list side effects such as "paralysis, brain damage, and death." I finally burst into tears for a moment.  I was trying so hard to hold it together for Vera, though. 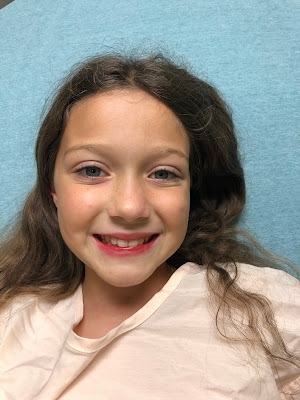 I let Justin know about the appendicitis and he immediately started working on finding a flight home. 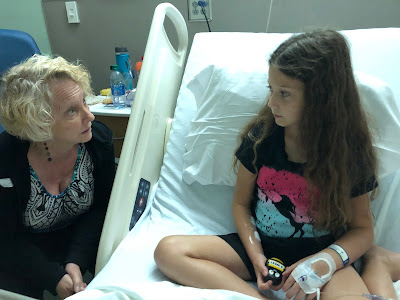 MaMai, Justin's mom, came to visit with us and cheer Vera.  See the little bee in Vera's hand?  MaMai went to multiple floors looking for it for Vera.  It vibrates and is meant to distract a child while they get poked, so we used it when vera had to get her second IV port (they needed it in a different location for the CT scan). 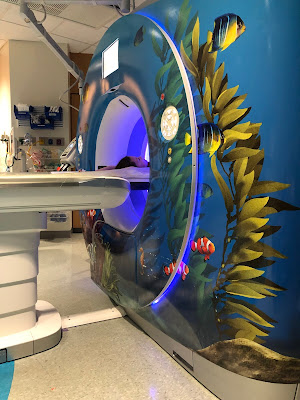 I feel that with all health care issues, you MUST be your own advocate.  There were some frustrating moments dealing with the healthcare, but overall the hospital was so wonderful for children.  Just take a look at the way the CT machine was decorated!  There were so many cheerful nurses along the way.
Justin got back into town late Tuesday night and spent the night with Vera.  I headed home to be with the boys for a bit. 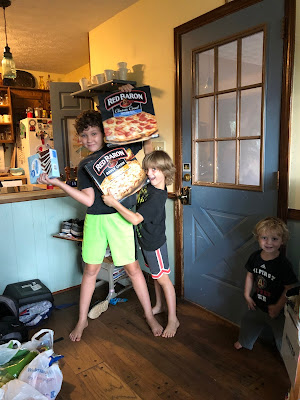 It is encouraging in a profound way when friends and family reach out to help during a critical time.  Justin's sisters were amazing to send food, despite their distance, through Walmart delivery so the boys would have easy meals while Mommy and Daddy took turns at the hospital. 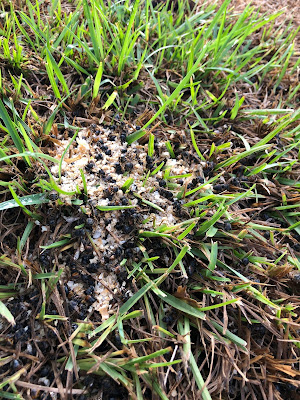 Before I headed back to the hospital, I had to run through the yard to catch our cat... and I saw dead bees... lots of dead bees... and I saw that my big hive was totally dead.  What a disappointment when my heart and mind were already so overloaded!  I felt horrible knowing that my inexperience likely contributed to this end.  So, when traffic was bad on the way back to the hospital and another driver wasn't so nice to me... I may have burst into tears again. 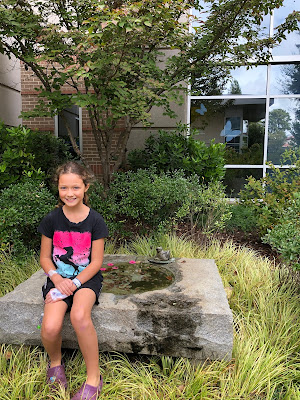 On day 2 at the hospital, we explored the garden.  Vera enjoyed putting the fallen flowers into this little wishing well. 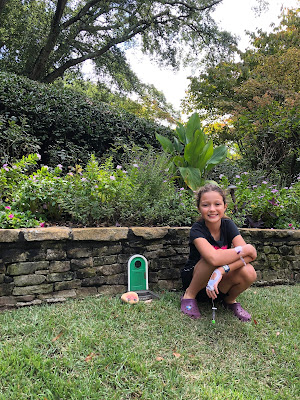 We smiled when we saw a tiny door. 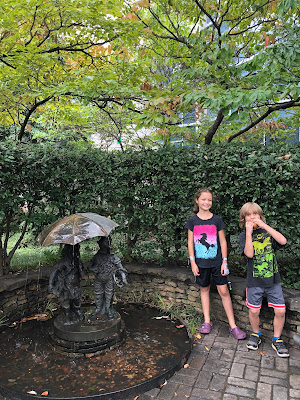 Silas, her younger brother, came up with me (and wondered what was wrong when I started crying in the car), and the two of them enjoyed spending some time together. 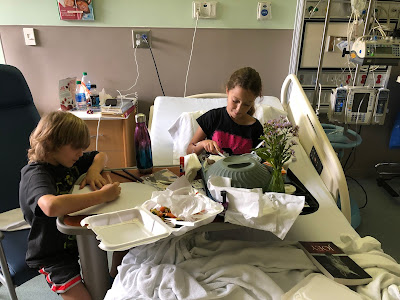 An art cart and a glamour cart came by Vera's room so the kids could get craft supplies, and Vera selected nail polish... my toes are a lovely bright purple right now. 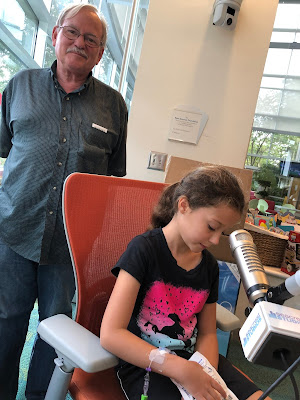 Grandpa Jim came while Vera was decorating a pumpkin in the cafeteria and stayed for a while during jeopardy. 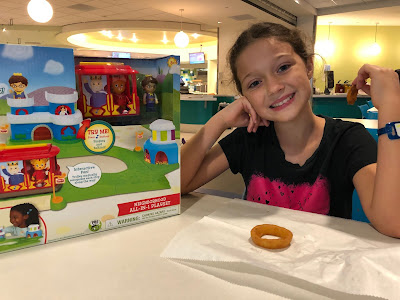 Vera got to choose a prize at the jeopardy activity and decided on a toy for her baby brother.  I mean... this girl!  She is a gem.  The host was so touched that she chose a prize for someone else that she asked Vera to choose another gift for herself, so she got a ball. 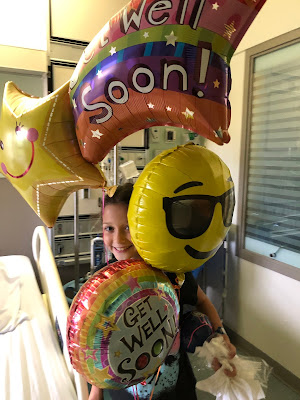 When we got back to our room, it was brightened with balloons from Justin's family!
By this point, we understood that Vera would be getting IV antibiotics until the following day when they would try to switch her to oral antibiotics. We are working on clearing out all of the infection right now.  About a month in a half from now she will likely get surgery to remove the appendix. 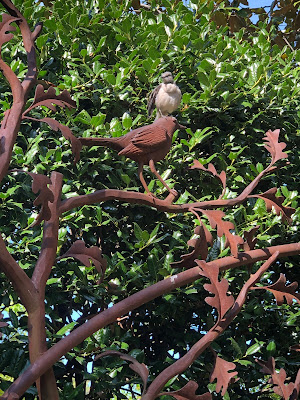 On the 3rd day at the hospital, we strolled through the garden once more and had a lovely visit with Vera's Sunday School teachers.  "It is nice to know you're so loved," Vera said in response to all the many kindnesses shown to her.  We loved seeing the mocking bird who liked to sit on the statue bird's head.  And although there would be a rousing game of BINGO later that night and a mini horse the next day at the hospital, we were thankful to get the oral medications down and get the green light to go home. 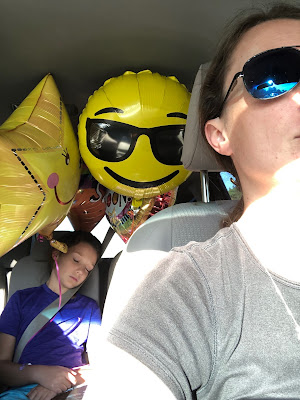 Homeward bound!  Vera's medications and her efforts fighting off infection wear her out. 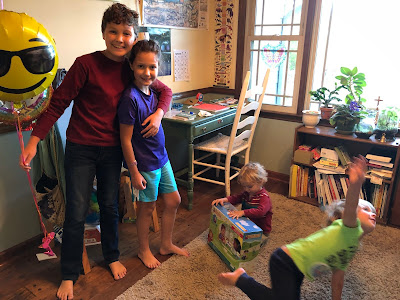 Her brothers were so pleased to have her back.  Daniel loved his Daniel Tiger toy.  William has been giving Vera different things each day with catchy phrases in his rendition of "The Twelve Days of Sickness."  So far we are up to "On the third day of sickness my brother gave to me, a St. Herman button, some Pokemon cards, and an anime drawing of thee." 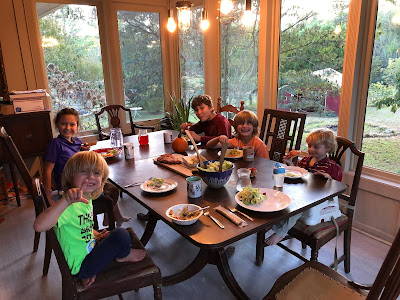 It is no joke when your child is ill, but we have much to be thankful for.  This was a difficult one to figure out, but we are thankful for the medical care available to us.  We are only part of the way there yet, but it is good to know what is going on and to be on the path of recovery.
I'm learning of more friends and family members who had their appendixes removed... Vera is so encouraged to know she isn't alone!